Recruiting asymptomatic participants with early disease stages into studies is challenging and only little is known about facilitators and barriers to screening and recruitment of study participants. Thus we assessed factors associated with screening rates in the MACUSTAR study, a multi-centre, low-interventional cohort study of early stages of age-related macular degeneration (AMD). Screening rates per clinical site and per week were compiled and applicable recruitment factors were assigned to respective time periods. A generalized linear mixed-effects model including the most relevant recruitment factors identified via in-depth interviews with study personnel was fitted to the screening data.

New review article from the MACUSTAR consortium in Ophthalmologica: Use of composite endpoints in early and intermediate age-related macular degeneration clinical trials – state-of-the-art and future directions

The slow progression of early AMD stages to advanced AMD requires the use of surrogate endpoints in clinical trials. The use of combined endpoints may allow for shorter and smaller trials due to increased precision. The review article gives an overview of the use of composite endpoints as primary outcome measures in clinical studies of early AMD stages. After reviewing a total of 673 abstracts and applicable full-text articles, 33 articles were eligible and thus were included in the qualitative synthesis. The main composite endpoint categories were: Combined structural and functional endpoints, combined structural endpoints, combined functional endpoints and combined multi-categorical endpoints. The majority of the studies included binary composite endpoints. There was a lack of sensitivity analyses of different endpoints against accepted outcomes (i.e. progression) in the literature. Various composite outcome measures have been used but there is a lack of standardization. To date no agreement on the optimal approach to implement combined endpoints in clinical studies of early stages of AMD exists and no surrogate endpoints have been accepted for AMD progression.

The annual meeting of the MACUSTAR Management Board took place as a virtual meeting. Members from all over Europe attended the discussion on the current progress of the Clinical Study as well as current topics. 40 members of the consortium and the IMI were present at the three-hour meeting.

The protocol published in the peer-reviewed journal Trials describes the low-interventional clinical multicenter study MACUSTAR employing a novel two-part design. The cross-sectional part (total duration, 1 month) and the longitudinal part (total duration, 36 months) include participants with iAMD and control groups with early/late/no AMD. The cross-sectional part’s primary objective is a technical evaluation of functional, structural, and patient-reported outcomes. The longitudinal part’s primary objective is to assess the prognostic significance in functional, structural, and patient-reported outcomes for the progression from iAMD to late AMD. All data will be used to support a biomarker qualification procedure by regulatory authorities.

The MACUSTAR project has completed recruitment of over 700 individuals with age-related macular degeneration for the clinical study on the development of novel endpoints for intermediate age-related macular degeneration (iAMD).  A total of 20 designated clinical sites in Europe participated and enrolled 585 iAMD patients and over 130 age-matched control subjects without AMD, with early and late AMD. A review period of up to three years will assess disease progression and risk factors with a series of functional tests, imaging modalities and patient-reported outcomes. Novel functional tests for the specific visual deficit in iAMD include dark-adapted microperimetry and standardized dark adaptation, as well as, state-of-the-art high-resolution retinal imaging including optical coherence tomography (OCT) and OCT angiography.

The annual meeting of the MACUSTAR Management Board took place in Berlin, Germany. Members from all over Europe discussed topics around the Clinical Study as well as recent advances of the work packages. In addition, the recruitment period was adjusted following a review of the recruitment status. A representative of the IMI participated in the event. 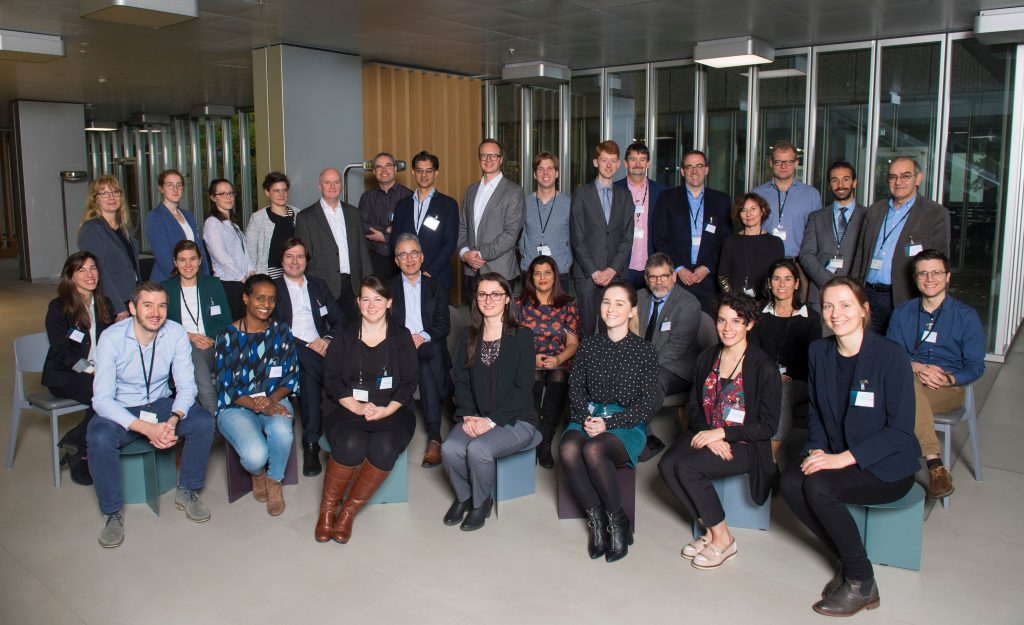 The lecture “MACUSTAR – An IMI2 study on AMD outcomes” held by Prof. Frank Holz at the annual meeting of the European society of retina specialists (EURETINA) in Paris, France was met with great interest. The symposium of the European Vision Clinical Research network (EVICR.net) allowed discussions on several innovative studies in the field.

This year’s meeting of the MACUSTAR Scientific Advisory Board (SAB) took place at ARVO 2019 in Vancouver, British Columbia. More than 30 participants from the SAB and the MACUSTAR consortium attended the meeting. Topics around the Clinical Study as well as structural, functional and patient-reported endpoints addressed in the MACUSTAR were discussed intensively.

Data from ongoing MACUSTAR navigation performance assessments were reported at ARVO 2019.  Researchers at University College London (UCL) and Institut de la Vision, Paris invited subjects recruited at Moorfields Eye Hospital and Centre National d’Ophtalmologie des Quinze-Vingts respectively, to take part in a navigation performance test.  Subjects were asked to navigate 4 obstacle seeded mazes under 4 different light conditions: 3 static conditions (256, 4, 1 lux) and 1 transition condition (256 reducing to 1 lux) at their fastest comfortable pace whilst avoiding obstacles: 3 normal controls and 28 subjects with age-related macular degeneration took part. Light level had a significant impact on walking speed and number of navigation errors (collisions or disorientation), with significantly slower walking speeds in the transition condition as compared to the brightest condition (256 lux) and significantly more errors in the transition condition compared to all other light conditions.  These results suggest subjects with AMD experience increased difficulty with navigation under a transient reducing light condition (i.e. walking from a brightly lit area to a dimly lit area), as compared to static low light conditions to which they have been adapted.  This work is ongoing.

The MACUSTAR clinical study now recruits at all 20 sites.

The MACUSTAR Management Board met in Basel, Switzerland to discuss the current progress of the study. In a round table discussion as well as in smaller working groups, current topics were discussed and the recent advances of the work packages were presented. More than 40 members of the consortium and the IMI from all over Europe were present at our meeting. 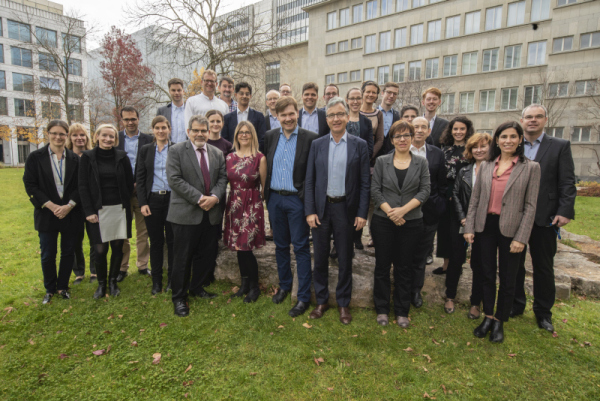 The team of the MACUSTAR project was present at EURETINA 2018 Congress from September 20 to September 23 in Vienna, Austria. We had good and intensive discussions at the Investigator Meeting on Thursday.  Later that day, Frank Holz  and Robert Finger also presented the MACUSTAR study in the symposium of the European Vision Clinical Research Network (EVICR.NET), “Focus on Multinational Clinical Research”.

New publication from the macustar consortium in Ophthalmologica: Development and clinical validation of functional, structural and patientreported endpoints in intermediate age-related macular degeneration

The article published in the peer-reviewed journal Ophthalmologica summarizes the methods used in the macustar clinical study to assess AMD and its impact on function and quality of life. For example, high-resolution imaging techniques will provide information on anatomical changes in the retina. Besides conventional visual function tests, vision under low-light conditions and contrast vision will be determined. Researchers will also capture the light sensitivity of the macula, the duration of dark adaptation, and reading speed and visual path navigation under low-light conditions. In addition, questionnaires will provide information on how visual impairment is perceived by the study participants. The macustar consortium aims to identify the best method or combination of methods that indicate if a novel therapeutic approach can stop AMD progression in the future.

Age-relate macular degeneration (AMD) leads to vision problems in low contrast or low luminance situations. To date, it is difficult to capture these problems in a standardized way using patient-report. Thus, we interviewed patients and collected aspects of these problems important to them which broadly fall into the categories of reading, social interaction/recognizing people, mobility/safety and the socio-emotional impact of these difficulties. These aspects should be considered when developing an instrument to capture patient-reported difficulty with vision-related activities and functioning under visually challenging conditions for AMD.

A pilot study was conducted at City, University of London to determine the optimal test conditions for the longitudinal evaluation of dark adaptation in people with intermediate age-related macular degeneration (iAMD) for the MACUSTAR study. The rod intercept time was assessed using the AdaptDX device under 5 test conditions over 2 visits: 76%, 70% and 65% rhodopsin bleach at 5 degrees eccentricity and 76% and 70% bleach at 12 degrees. Fourteen people with iAMD and 10 controls attended for 2 visits. Nearly half of the participants with iAMD produced an unacceptably long recovery time (>20mins) using a 76% bleach at 5 degrees eccentricity. The 76% bleach at 12 degrees provided almost equivalent separation between iAMD and controls but recovery was achieved within 20 minutes for almost all participants. The latter condition was therefore deemed to be most suitable for this clinical application.

The work has also been published in the journal Investigative Ophthalmology and Visual Science under the DOI: 10.1167/iovs.18-24211 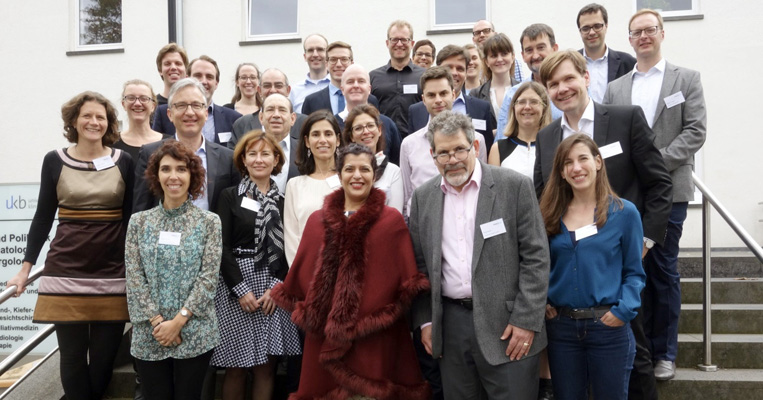 Official start of the macustar project